The Campaign was founded in the United States by American producer and writer John Teton, who developed the IFST statement of principles in 1993 during a period of anti-hunger research he conducted while working on two hunger eradication projects--a novel (Upsurge, published in 2006) and a real-world social action program, which became the IFSTC. From that point on, the Treaty’s Statement of Principles has served as a touchstone to gather advice and support fueling its growth as a major human rights inititative.


In preparation for the 1996 World Food Summit hosted by the United Nations Food and Agriculture Organization, Mr. Teton  coordinated a series of teleconferences among hunger experts in the U.S. and Canada to put the proposed treaty into its present form, and led a delegation of IFST advocates as participants in the Non-Governmental Organization Forum associated with the Summit. In 1998 he coordinated the Conference on Consensus Strategy on the Right to Food in Santa Barbara, California, with anti-hunger experts from five continents.


From the beginning, the IFST Association has functioned as a volunteer organization, working to gather momentum behind the Treaty Principles among experts, political leaders, religious communities, grassroots networks, and individuals. The organization disseminates information about the IFST through articles in various publications including the Harvard International Review and the Yale Journal of International Affairs, media interviews, presentations on major university campuses and government meetings (see Events), and conferences with U.S. House and Senate staff focusing on strategies to how best present the IFST to Congress.


In 2005 the base of operations for the IFST Association and the IFST Campaign shifted from California to Oregon in the United States.


Individuals and organizations from all parts of the U.S. and the world interested in exploring possibilities for advancing the Treaty are encouraged to Contact Information. 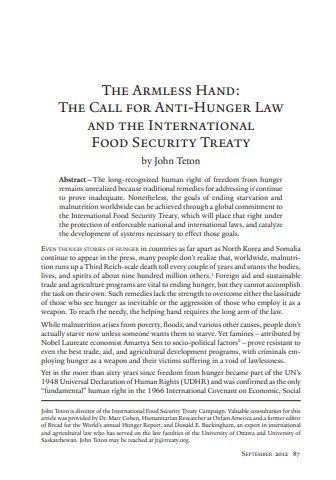